zero degrees - Akram Khan and Sidi Larbi
zero degrees is a remarkable collaboration between four of today's most respected artists.
Moroccan-Flemish SIDI LARBI CHERKAOUI is well known for his work with Les Ballets C. de la B. while AKRAM KHAN is world renowned for developing his own 'contemporary Kathak' style, winning numerous awards. For zero degrees they bring their unique styles together in this spellbinding piece of dance.
Mercury Award winning composer/producer NITIN SAWHNEY adds his own East-meets-West sound with a specially commissioned score played live by four musicians, and Turner Prize winner ANTONY GORMLEY has contributed the staging - two life-size casts of the dancers.
zero degrees explores borders - between countries, cultures and, most importantly, between life and death. It challenges, prompts and inspires, in a seamless fusion of dance styles, music and contemporary art.
Recorded live at Sadler's Wells Theatre, London
http://www.akramkhancompany.net/
2min21seg

From Wikipedia, the free encyclopedia

According to culturebase.net, "London-based Akram Khan is a leading dancer and choreographer, acclaimed for the vitality he brings to cross-cultural expression, influenced by his training in Western contemporary dance and Kathak, the Indian classical genre."[1] He has also played in the role of Ekalavya in Peter Brook's The Mahabharata.

An articulated manikin made from a mould of Akram Khan's body by the British sculptor, Antony Gormley (nicknamed Marka Akram backwards), is used in a performance with Sidi Larbi Cherkaoui, who also has a Gormley dummy (nicknamed Ibral), to music composed by Nitin Sawhney. The production is called 'zero degrees' and was first seen at Sadler's Wells Theatre, London in 2005, before touring internationally.

Akram Khan is an acclaimed choreographer working in Britain today. Born in London into a family of Bangladeshi origin in 1974, he began dancing at the age of seven. He studied under the great Kathak dancer and teacher Sri Pratap Pawar, later he became his disciple. He began his stage career at the age of 14, when he was cast in Peter Brook’s legendary production of Mahabharata, touring the world between 1987 and 1989 and appearing in the televised version of the play broadcast in 1988.

He is BA (Hons)Performing Arts (Dance) from De Montfort University in 1994.

Following later studies in contemporary dance and a period working with Anne Teresa de Keersmaeker’s Brussels based X-Group project, he began presenting solo performances of his work in the 1990s, maintaining his commitment to the classical kathak repertoire as well as modern work. Among his best-known solo pieces are: Polaroid Feet (2001), Ronin (2003) and Third Catalogue (2005).

In August 2000, he launched his own company, which has provided him with a platform for innovation and an increasingly diverse range of work evolved in collaboration with artists from other disciplines, ranging across theatre, film, visual arts, music and literature.

Among his most notable company works are Kaash (2002) a collaboration with artist Anish Kapoor and composer Nitin Sawhney, (2004), created for seven dancers, four musicians and accompanied by a text by acclaimed writer Hanif Kureishi, for which he received a South Bank Show Award (2005); zero degrees (2005), a collaboration with dancer Sidi Larbi Cherkaoui, sculptor Antony Gormley and composer Nitin Sawhney, premiered at Sadler’s Wells.

One of his most recent projects is Variations, a collaboration with London Sinfonietta to celebrate the 70th birthday of Steve Reich, which premiered in Cologne in March 2006, and toured to Europe and America later that year. The other is Sacred Monsters, a major new work featuring ballerina Sylvie Guillem, with additional choreography by Taiwanese choreographer Lin Hwai Min, and a score by Philip Sheppard (musician) which premiered at Sadler’s Wells in September 2006. More recently, he made a new work, Lost Shadows, as guest choreographer, for Cloud Gate Dance Theatre, Taiwan’s first contemporary dance company, which premiered in Taiwan in March 2007.

Akram Khan was also invited by Kylie Minogue in summer 2006 to choreograph a section of her new Showgirl concert which opened in Australia in November 2006, and toured to the UK (London and Manchester) in January 2007.

bahok, a new work choreographed by Akram Khan in collaboration with the National Ballet of China premiered in Beijing in January 2008 before touring worldwide. He is also working on a major new work with the Oscar-winning actress Juliette Binoche entitled In-I which they are co-directing. This will premiere in London in September 2008 and features design by Anish Kapoor and a score by Philip Sheppard.

Akram Khan has been the recipient of numerous awards :

- The International Movimentos Tanzpreis (2004) for ‘Most Promising Newcomer in Dance’, 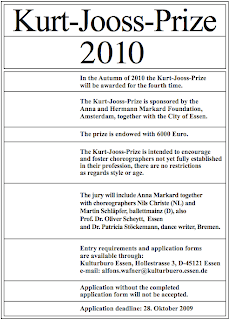 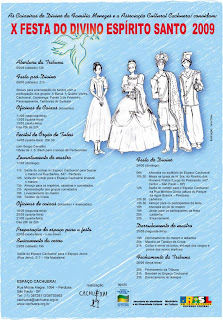 PREPARAÇÃO DO ESPAÇO PARA A FESTA

COLABORE COM A FESTA DO DIVINO